APTN Coverage of the Symposium, with Justin Brake 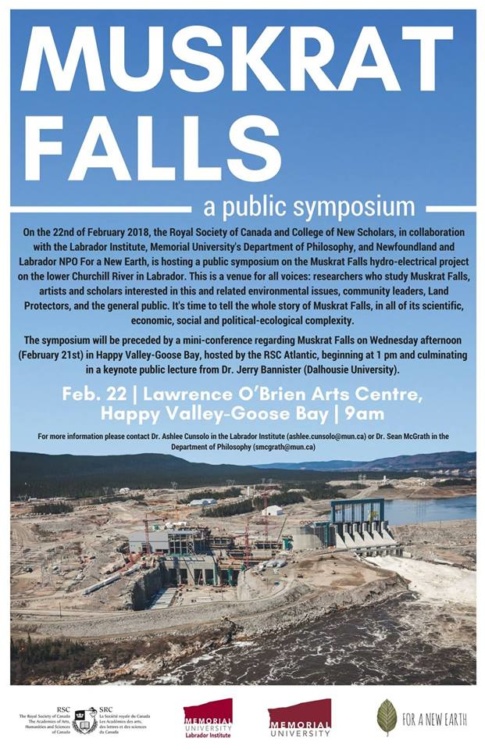 On the 22nd of February, 2018, the Royal Society of Canada and College of New Scholars, in collaboration with the Labrador Institute, Memorial University’s Department of Philosophy, and Newfoundland and Labrador NPO For A New Earth, is hosting a public symposium on the Muskrat Falls hydro-electrical project on the lower Churchill River in Labrador.

This is a venue for all voices: researchers who study Muskrat Falls, artists and scholars interested in this and related environmental issues, community leaders, Land Protectors, and the general public.

It’s time to tell the whole story of Muskrat Falls, in all of its scientific, economic, social and political-ecological complexity.

The symposium will be preceded by a mini-conference regarding Muskrat Falls on Wednesday afternoon (February 21st) in Happy Valley-Goose Bay, hosted by the RSC Atlantic, beginning at 1pm and culminating in a keynote public lecture from Dr. Jerry Bannister (Dalhousie University).

For more information, please contact Dr. Ashlee Cunsolo in the Labrador Institute (ashlee.cunsolo@mun.ca) or Dr. Sean McGrath in the Department of Philosophy (smcgrath@mun.ca).

The event is open to the public and is free of charge. Hope to see you there!