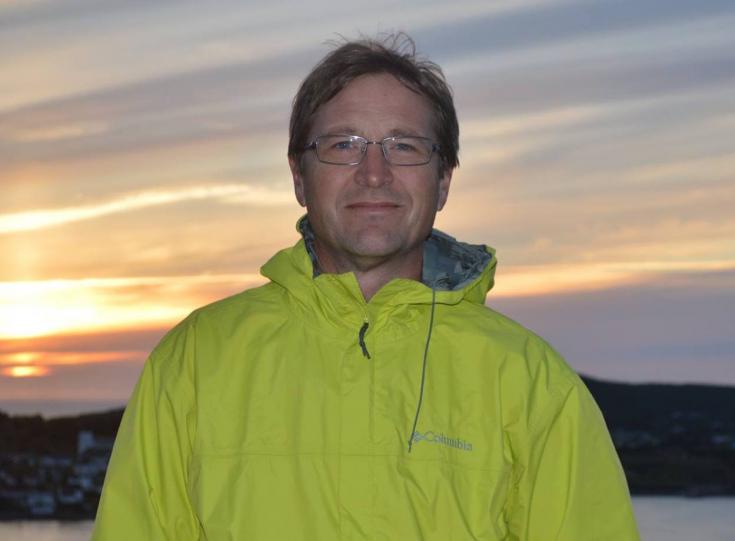 We’ve forgotten that we are bodies, and this forgetfulness is a significant part of what ails us.

Last summer I heard rumors of a new group –‘For a New Earth,’ — and their plans for a rather quixotic event on Newfoundland’s West Coast. It was immediately clear that something more than a standard academic conference was in the works, and that is what attracted me to it. Yes, there would be numerous papers and presentations and panels, but art, music, performance, feasting, conversation, walking—these would also take centre stage, supplementing, amplifying, perhaps even negating the ethos of a conference.

People were unsure about the performative genre that was being created—‘conference’ did not capture the range of the action; ‘event’ sounded too generic and managerial. At some point, I suggested it was a ‘festival,’ and the idea stuck in the minds of some. I had my own reasons for dropping the ‘festival’ label—much of my research and teaching is in the area of ritual studies, so it was a way of making myself relevant.

‘For a New Earth.’ What does this mean? In papers and discussions last fall some raised critical questions, reading into the phrase an effort to pull the earth up by her own bootstraps—we will make the earth new, we will change things on her behalf, since she is unable—and saw in this a misguided, problematic, hubristic sensibility resting at the very heart of life in the anthropocene. I sensed something different in that little word, ‘for’: I imagined the phrase and the festival in terms of an offering, a gift given to the earth—and gifts, freely given, are a means expressing thanks and sustaining relationships: perhaps the festival was as much a gratuitous, celebratory gesture as a ‘staged intervention.’ It may also have been a cry of despair (which is the tack I took in producing a short film of images and voices, ‘Remembering the Future of Nature’).

An early book in the theorizing of festivity, written a generation ago, was titled In Tune with the World. Festivals, ideally, attune people to their local surroundings, to each other, to their histories and traditions. One way of imagining our ecological crisis is that we are out of tune, our beliefs, attitudes, practices are discordant, they lack harmony—from this musical perspective, ritual action is one way of getting in tune, of becoming attuned. Ritual is not merely or even chiefly confirmatory or expressive but rather noetic, a way of knowing, and also pragmatic, a way of responding. Another thing rituals such as festivals accomplish is the making of kin outside the biological line – weddings are the obvious example, or traditions of making godparents and godchildren. But festival cultures also build and sustain close relationships with others across space and time. At the follow-up event to The Future of Nature, The Future, the Arts and Ecology, held this past March, after Dr. Eaton’s talk, during the opening reception, I heard several people comment, “it is like a family reunion.”

I am pointing here to the ritual dimensions of ecological crisis and response, and suggesting that For a New Earth is informed, though rather tacitly, unconsciously, half-knowingly, with a ritual intuition, a recognition that form is as important as content; if our choreographies simply ape our worldview, not much changes, regardless of the content the apes speak. Dystonic bodily forms cannot simply be thought or desired away, at will. A ‘disposition,’ lets remember, is a thoroughly embodied phenomenon—attitude, position, posture, stance, pose, inclination, stand—we think in and through our body. There exists an interplay of bodily habits, patterns of practical ways of being in the world, and forms of thought and valuing. In western culture, the body has been long been subjugated to semantic content, and the tentative, awkward ritualizing that took place during The Future of Nature bears this fact out.

So, the big question: Is the nature of our ritualizing part of the ecological crisis facing us, and is ritual in any way part of the answer? Ritual barely makes it on to the map of ecological and environmental concerns and responses, even though Native traditions, which are often lauded for being ecologically sensitive, are generally ritual-centric, and there does exists a growing tradition of ritualized responses to ecological crisis—the Buddhist practice in Thailand, for example, of ordaining trees in the face of deforestation.

Sometimes a hard brush stroke is needed to give a picture some definition. Is it easier to think oneself into a new way of acting, or act oneself into a new way of thinking? By ‘act’ here I don’t mean merely activism—throwing our selves at the barriers, chaining our bodies to trees, laying down in front of bulldozers—though certainly more of that is direly needed. Nor do I mean only the action of digging into the soil with one’s hands, planting and harvesting, though more dirt under our fingernails is also a pressing need. I mean ritual action—stylized, repetitive, elevated, condensed, formalized, embodied enactment—and this kind of action may well complement both activism and activities such as gardening.

In the opening scene of the acclaimed film The Sacrifice, written and directed by Andrei Tarkovsky, Alexander, an aging professor and theatre critic, a man of words and ideas, wanders with his young son along a bleak shoreline, plants a scraggly tree, and ponders the mysteries of life. Alexander tells his son a short tale of a monk who each day carries a dipper of water up a mountain to water a tree. He does this for three years, and one morning, he arrives to find the tree in full blossom. Alexander continues: “You know, sometimes I say to myself, if every single day, at exactly the same stroke of the clock one were to perform the same act, like a ritual, unchanging, systematic, every day at the same time, the world would be changed. Yes, something would change, it would have to.”

Gary Snyder has penned many sinewy lines; this is one of them: “Performance is currency in the world’s deep gift economy.” So, I ask, as we continue to live in and toward the future that is now: upon what kind of performative currency are we building our exchanges, the intercourse among persons and the intercourse of person with the environment? How do we offer deep gifts to the earth and its inhabitants? What acts, what gestures, what postures, what words, dedicatedly rehearsed, rightly performed, and collectively enacted can save the planet? That question seems as urgent to me as questions about the ideas, attitudes or ethics that might save us.

When religious liberals or secular humanists or philosophers wrestle with ecology, it is ideas, beliefs, and ethics that are first and foremost laid on the table. The guiding assumption is: get the idea right, the value right, the facts right, and the rest will follow. Within my field of religious studies, Sallie McFague’s The Body of God: Toward an Ecological Theology is an exemplary case. Catherine Keller, in her review of the book, writes: “McFague has created something important and necessary—a model of God specifically for the sake of the earth. If traditional concepts of god have alienated us from the bodies of the material world, then what alternative do we have?” The solution, argues McFague and echoes Keller, is a better concept—in this case, feminist inspired images of the sacred. Elsewhere, we read or hear of a call for a better ethic, or for improved scientific knowledge—all this necessary, to be sure, but also terribly insufficient. No number of Earth Charters, no matter how laudable the principles informing them, will amount to a hill of beans without ways of driving those attitudes deeply into our bones and sinews and organs and brains.  We can imagine our relationship to the earth as an I-Thou relationship—but if there is no exchange of gifts, no embodied gestures, such a relationship does not exist because we are, after all, bodies not minds.

Hildegard of Bingen, the twelfth-century mystic, healer and visionary, wrote of the “green life force of flesh,” so she can help in the greening of religion, and we should use her words; they are good words. Religious leaders are now scouring scriptures and textual traditions in search of images, translatable into concepts and precepts that might inspire ecologically responsible behavior. Keepers of the world’s religions are also variously putting tradition in the dock as well as defending tradition against attacks that blame our religious inheritance for the sorry state of the environment. In self-defense, they launch criticisms of economic greed and human failure to exercise stewardship of the land. The monotheistic traditions bear a large share of the blame, because of their entanglement in Western ideologies of natural domination and dualistic separation. The truth is that none of the large-scale religions has resources adequate to the crisis. None of the “world” religions is an earth religion.

If one asks, What are all those bodies in McFague’s book doing? The answer is that they are thinking, imagining, or acting ethically. What they are not doing is ritualizing. The connection between ethics and ritual is not at all obvious in the popular mind, in religiously motivated environmental activism, in philosophical treatises, or in ritual theory, for that matter. It seems we’ve forgotten that we are bodies, and this forgetfulness is, I think, a significant part of what ails us. As For a New Earth grows and moves and shifts, its members would do well to reflect on the role and place of formative ritualized gestures.